On March 31, 2019 multiple sources reported Entrepreneur and rapper Nipsey Hussle and 2 other men were gunned down in front of their store in the Hyde Park neighborhood of Los Angeles.

Nipsey appeared to be receiving CPR at the scene, but it was later confirmed at the hospital that he in fact passed at the age of 33. Multiple videos show that he had received 2 gunshot wounds to the head and multiple to the body making a total of 6 gunshots that hit Nipsey

Nipsey opened the store back in 2017, and has given back to the community through the store as well as was in the process of releasing a documentary about Dr. Sebi.  He was a world Famous medicine man how suffered an odd death while in police custody.

What's even more crazy about this whole thing is Nipsey Hussles final tweet.

Having strong enemies is a blessing.

5:46 PM PT -- Law enforcement sources tell TMZ  ... the suspect cops are looking for is a black male in his 20s. We're told he approached Nipsey and co. by foot Sunday afternoon and fired multiple shots ... only to depart right after in what we're told appeared to be a nearby waiting vehicle with a separate driver, who our sources say was female.

5:12 PM PT -- Our law enforcement sources tell TMZ ... Nipsey Hussle has died. He was 33 years old. He's survived by his two children and his girlfriend, Lauren London, with whom he just had a child in 2016.

4:32 PM PT -- Law enforcement sources tell TMZ ... 3 people were shot at Nipsey's store, and one of those people just died at the hospital. It's unclear if that person is Nipsey. We're being told that one man fled in a vehicle after the shooting.

Nipsey Hussle was just shot in LA ... TMZ has learned.

Multiple sources tell us the rapper was gunned down Sunday in the Hyde Park neighborhood of Los Angeles, south of the Crenshaw area. We're told he was at his clothing company called the Marathon Store. He opened the place back in 2017. 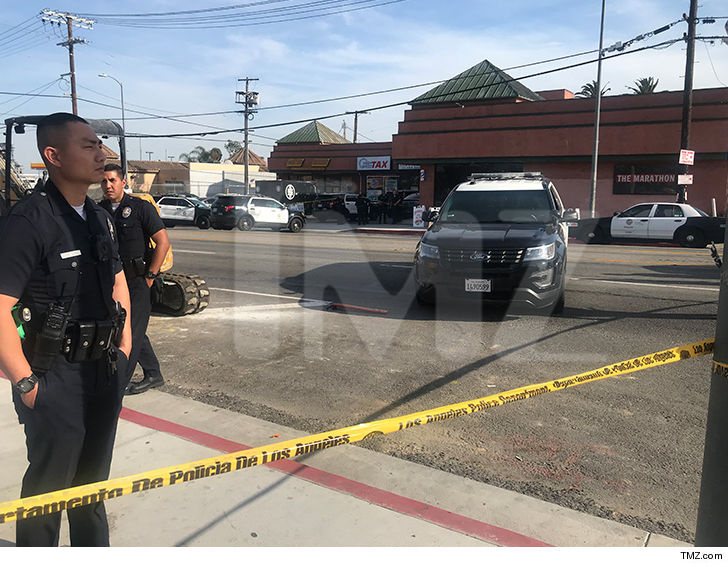 His condition is unknown at this point, but eyewitnesses say they heard multiple shots fired. Police and paramedics have swarmed the area and taped off the crime scene.

Nipsey appears to have been receiving CPR on the scene as well. Videos are circulating showing him receiving CPR from an EMT, who's doing chest compressions.